Chicago has always been a distinct and enigmatic place to me. The city, like the perfect interfusion of Ying and Yang, can so effortlessly morph concrete-laden architectures with perennially-infused backdrops. Take the Loop for instance. It’s the perfect juxtaposition of two worlds, one marked by the rapid mobility of human beings and turbo-powered machines that, within a few steps east of a six lane street, expands to an ethereal array of green landscapes and flowerbeds comparable to thriving botanical gardens far out in the suburban areas (read more HERE). 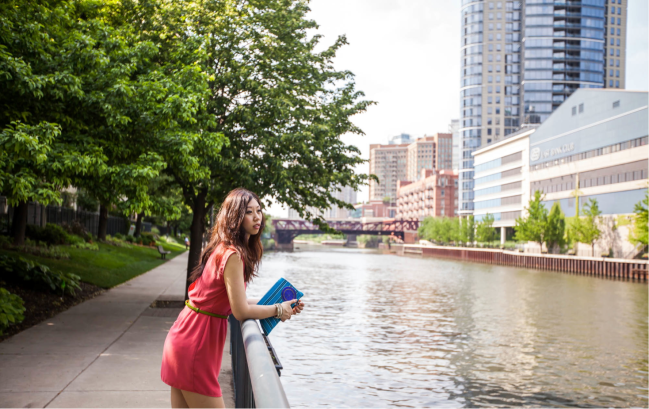 Vintage architectures developed so technically with steel frames and terra cotta skins tower the vast open land by Lake Michigan, a design so remotely native to Chicago’s early developments in the mid-1890s. Past the Chicago red line a mile north of the Loop is where Chicago-style bungalows are well preserved in its quaint, organic form.  Made of sturdy mahogany bricks in decorative accents, these houses are flourished with colorful blossoms scattered across lawns so thriving and green.

That’s the Windy City in its innate form to me – scenically alluring with Mother Nature’s bountiful blessing, structurally magnificent with towering skyscrapers in modern and Neo-Classical forms, and widely diverse in its defined neighborhoods enamored with cultural and ethnic flair.

In tune with my traveling spirit to explore a different neighborhood every week (so far I’ve covered Gold Coast (HERE), River North (HERE), and Lincoln Park (HERE), this fine and dandy day I came across the Kinzie Street neighborhood by the Carroll Avenue Bridge. Going by its widely-popular moniker, the Kinzie Bridge is a single leaf bascule bridge along the north branch of the Chicago River. A little food for thought—did you know that when it opened in 1908 it was the world’s longest and heaviest bascule bridge?  “Bascule” in French literally means “balance scale”, which the terminology holds true as a bascule bridge uses its counterweight against a horizontal pillar to maintain its equilibrium and only swings upward when signaled for vessel clearance.

Standing on the tarnished iron ore panels and looking far into the distant, I felt the ticking hand stood still for a moment, much like the remote buildings settled in tandem with one another. The next moment I look up, a traveling cruise vessel heads my way, erupting peace and quietness as quivering waves pound against shore.

Following the direction of sail, I walked past Kinzie Park towards a residential area where I found a walkway enveloped in a garden full of lush greeneries and flowerbeds. As I sat there looking into the horizon, I realized that I was in the center of two worlds–one being a bustling metropolis on my right and the quiet, Zen-filled recreational area on my left. It’s like concrete-infused jungle meets sartorial heaven (but in tiny sprinkles of angelic dusts).

In my outfit today I wanted to bring out the idea of mixing “two worlds” by pairing a domain color with a subtle one, much like my vibrant pink sheath embellished with a mint green belt and gold detailing.

To add vibrancy to the backdrop, I accessorized with my trapezoid clutch as its tribal resonance brings out the raw, innate beauty of the vicinity. As I set forth on the walkway following the settling waves reverberated by the remnant of its creator, I felt myself careless and free, ready to set sail on to new and exciting grounds. Gone with the wind, whichever direction it may blow.  Lighting up the journey with a smile on my face, on my way I go 🙂 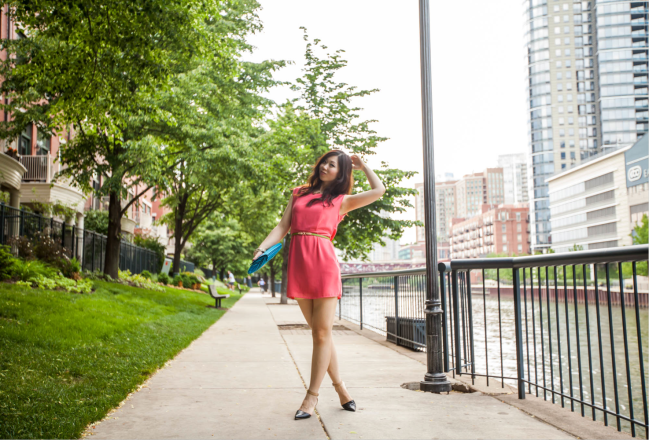 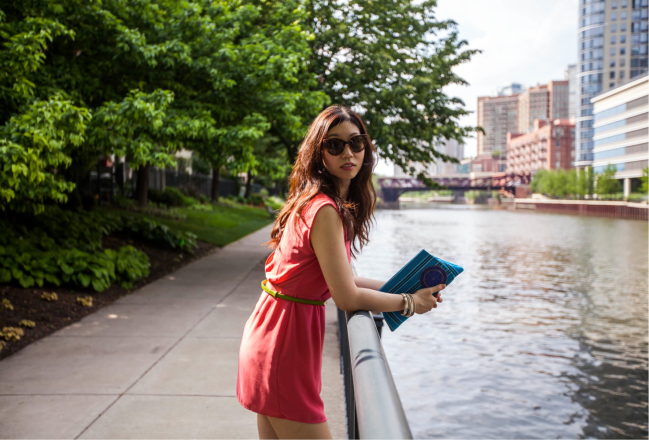 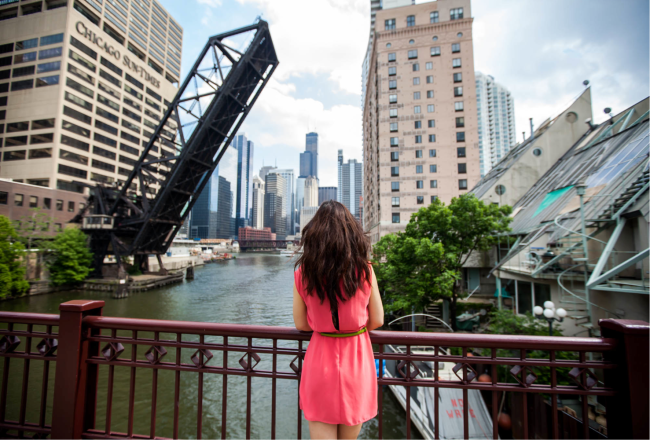 2 thoughts on “Gone With The Wind (Kinzie Bridge)”